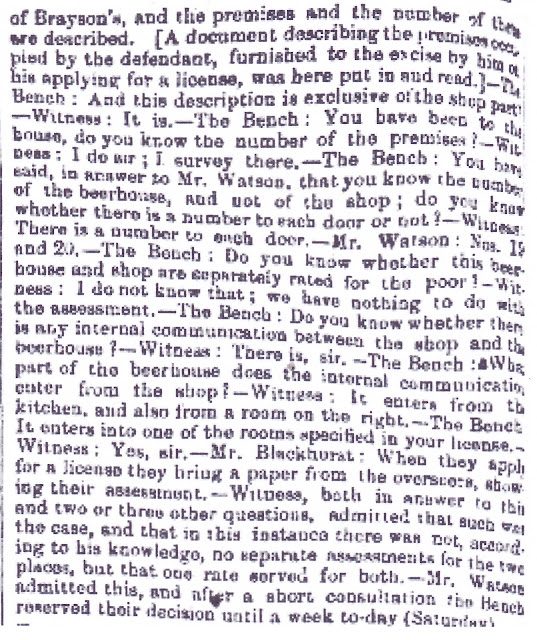 Preston Guardian  19th June 1869
*
AN OFFENDING BEER-SELLER
William Swarbrick, landlord of the Guild Tavern, Park Road,
was charged with supplying drink during prohibited hours. It
appears that about twenty minutes to eleven o'clock on Sunday
morning, the 3rd inst., the defendant's son was seen by P.D. Dawson
and P.D. Charnley, to supply drink to a woman at the back door,
which she took away in a bottle. The case was proved, and
the defendant was fined 20s and costs.

MARY ELLEN HELENA WILLIAMS, a hawker, was
charged with being drunk and disorderly the previous
evening, in Mrs. Heap's Arkwright Arms.
PC Eteson had been called in to expel her, and when
inside, the prisoner, who was drunk, was striking at
a man named Foster, landlord of the Guild Tavern,
Park Road, with a pair of scissors. She would have
blinded him but for the officer, who diverted the blow,
which he received in the shoulder. The charge of
drunkenness was withdrawn, but she was committed to
14 days for the assault.
When leaving court she pleaded to be allowed a fire
in her cell.
Preston Chronicle  28th May 1881
* 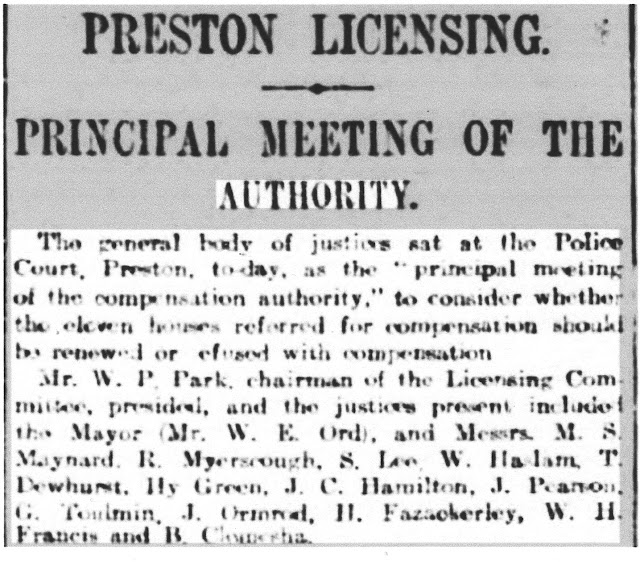 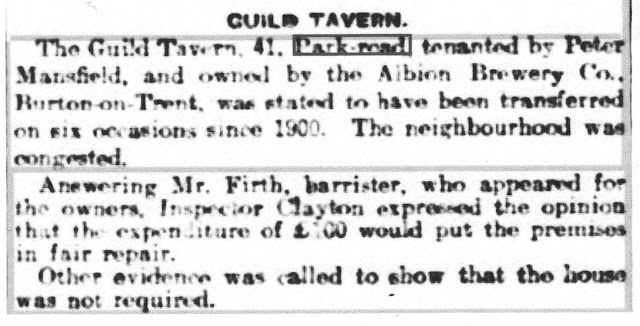 It would appear that in 1838 it opened as the BOLD DRAGOON, and then between 1861 and 1871
the name was changed to the Guild Tavern. My guess is that it was in 1862, at the time of
the Preston Guild.
*
TO BE LET
And may be entered upon on the 1st November next.

THE BEERHOUSE with PROVISION SHOP adjoining, situate in
Park Road, corner of Carlisle Street, known by the sign of the
"BOLD DRAGOON."

The stock to be taken at a valuation. The present tenant is
retiring from business, having occupied the premises in the
beer trade for twenty-four years.

Apply on the premises

Preston Chronicle  20th October 1855
*
The above sounds as though it could have been Richard Page, the
earliest landlord I have a record of. Perhaps he had a manager on
the premises - see MINE HOSTS.
*
CENSUS RETURN
Described as the Bold Dragoon in the Census of 1861. 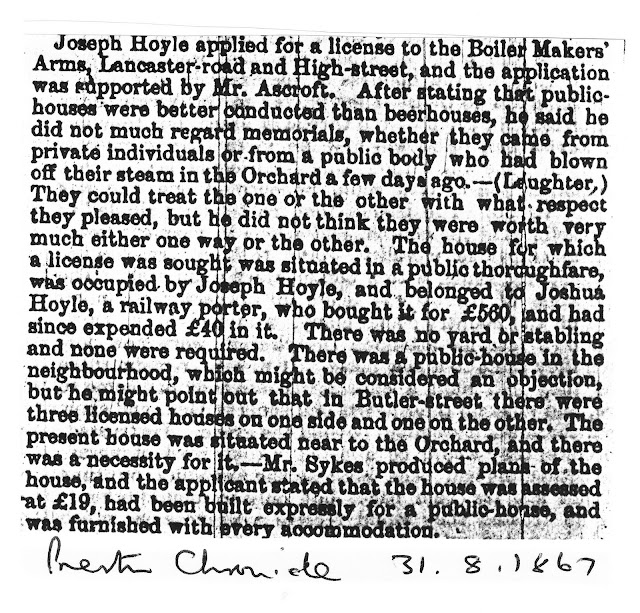 *
At the 1877 Brewster Sessions, a licence was granted to Joseph
Hoyle, "Brickmakers' Arms" 33 Lancaster Road South.

This was a journalist's error.
* 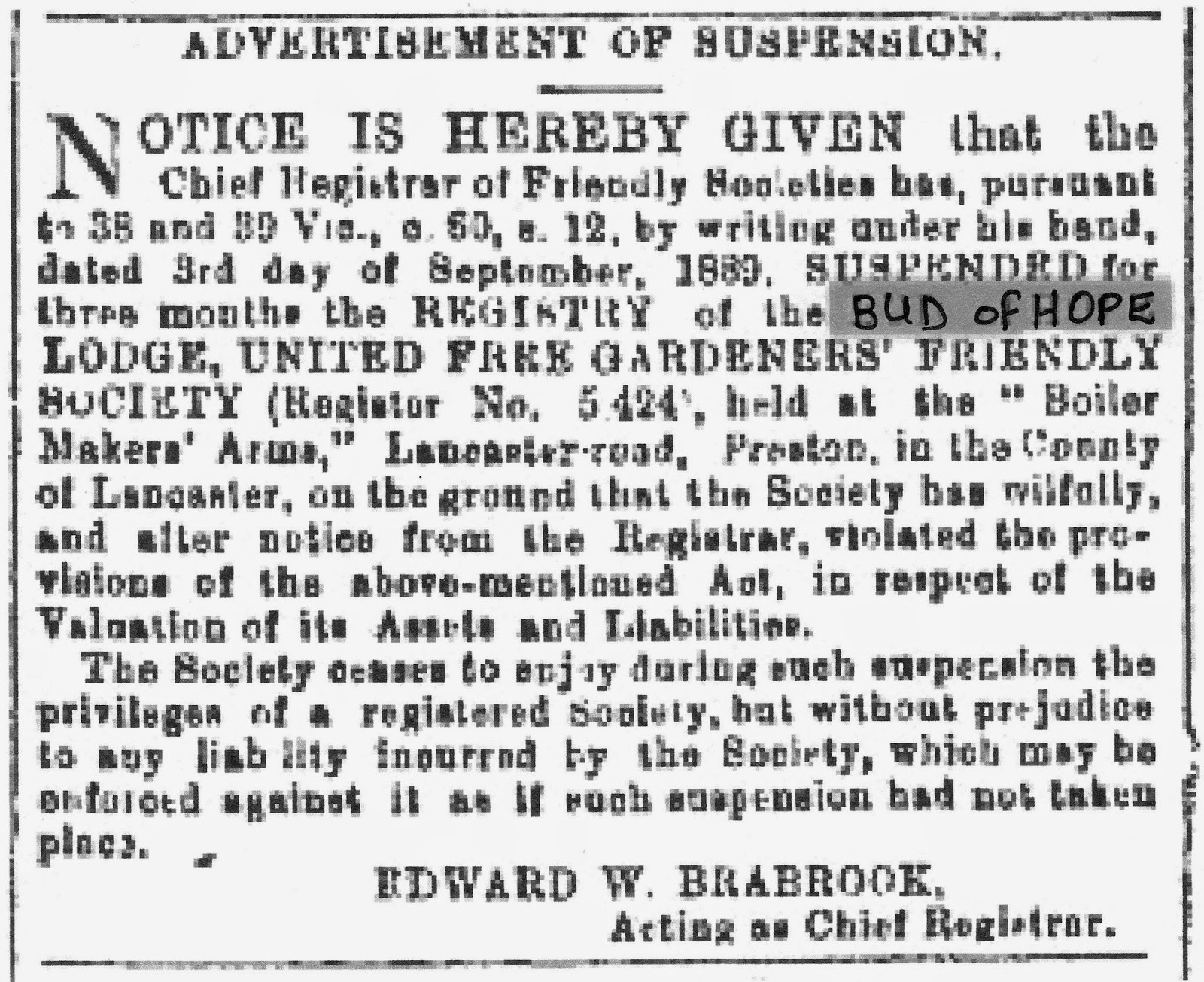 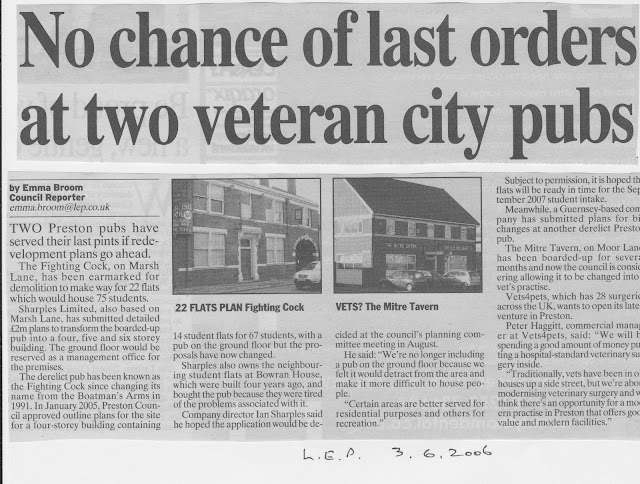 MINE HOST
1838 - 1841      Lucy Lancaster
*
HELD TO BAIL - At the Town Hall, during the week, William
Barwise, a shoemaker, of Russell Street, Richard Richardson, a
plasterer, of the North Road, James Sanderson, a piecer, of York Street,
and Thomas Hodgkinson, a butcher, of the Shambles, Lucy Lancaster,
of Bridge Street, and Betty Calderbank, of Old Chapel Yard, have
been severally held to bail to keep the peace for 12 months.

BOAR'S HEAD
Friargate Brow
*
This inn is marked on a 1694 Map
held at L.R.O. (see below)
*
Anthony Hewitson, however, wrote the following in
his notes to the Preston Court Leet Records,
"The "Boarshead" was an inn, and presumably was, or
stood on the site of, the present 'Boar's Head Hotel,"
near the top of Friargate" He then gave the entry,
taken from the Records:
"Thomas Worden, Landlord at Boarshead, for suffering
prople's carts to stand in public street at night, without
any Light at his Door, and for every offence after notice,
we amerce him 6s 8d."
Court Leet Records October 23rd 1782
The evidence from the 1684 map seems conclusive that
the Boar's Head was on Friargate Brow at that time, and
would seem to lend weight to it being there 100 years later.
Pers. comm.
*
MINE HOST
1684     James Wittoll
1782     Thomas Worden
* 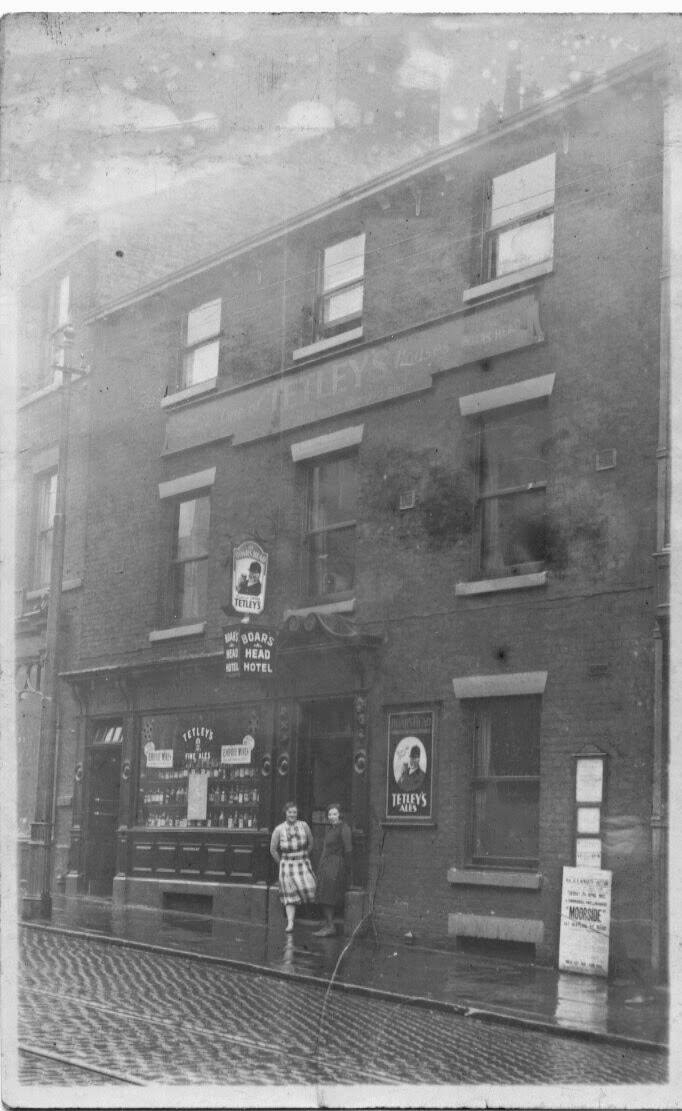 A pre-War 'Boar's Head Hotel' with the tram lines still in situ.
* 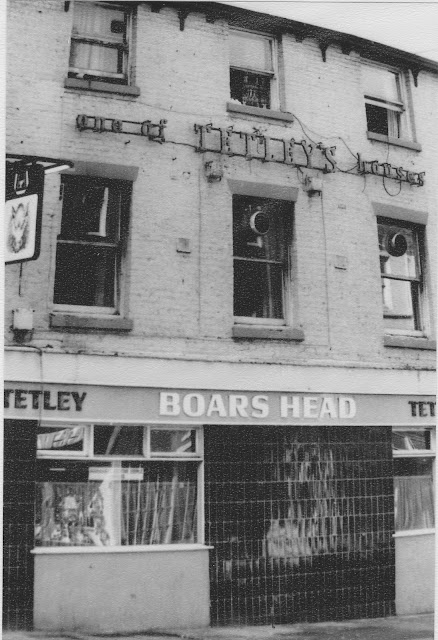 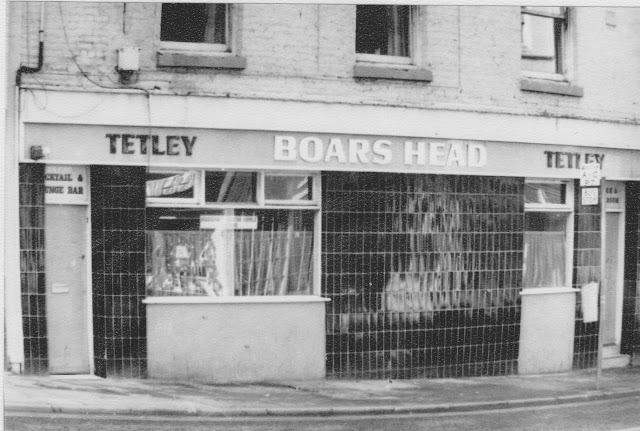 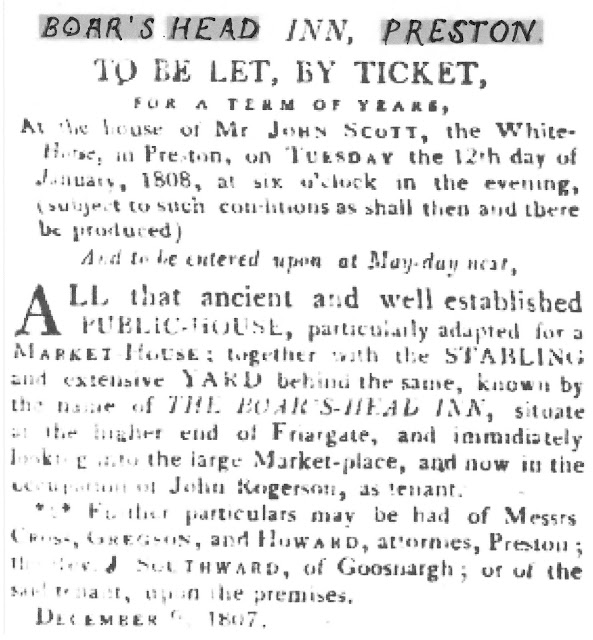 Lancaster Gazette  12th December 1807
*
DEATH:  On Monday last, in Blackburn, after
a long and tedious illness, which he bore with
patience and resignation, Mr. John Rogerson,
aged 66 years, formerly landlord of the
Boar's Head Inn, in this town.
Preston Chronicle  12th June 1813
It isn't known when he left the Boar's Head.
* 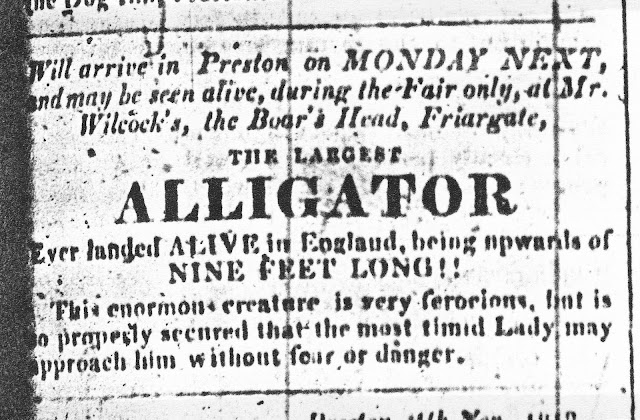 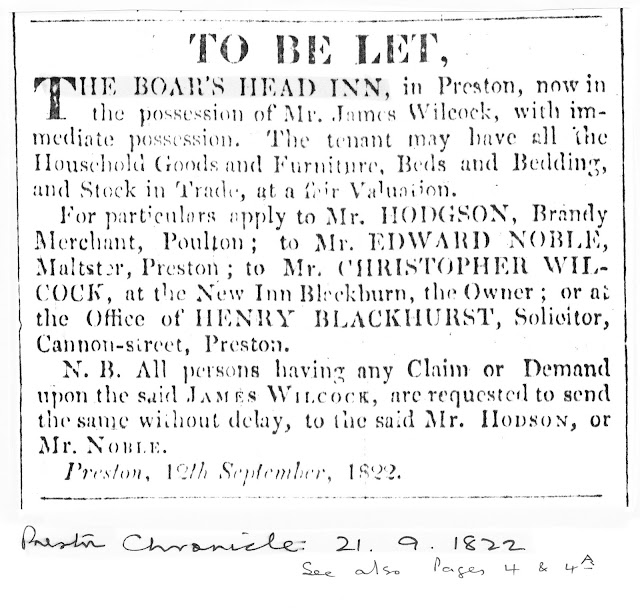 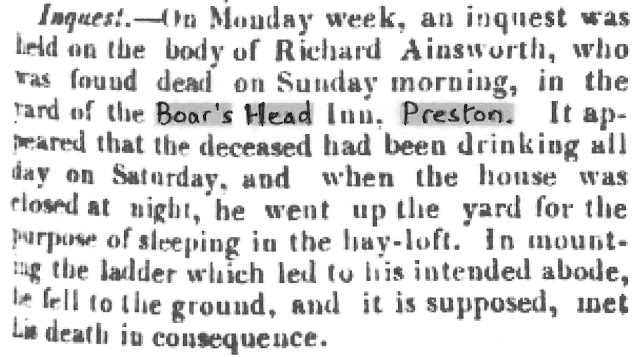 Lancaster Gazette  14th December 1822
*
STORM
During the night of Sunday last, this town and neighbourhood was
visited by a storm of wind, accompanied by occasional heavy rain,
which exited considerable alarm amongst the inhabitants...... We
have to record one instance of a hair-breadth escape of several
members of a family from an instant destruction by the falling of a
chimney. A few minutes before three in the morning, Mr. Blackburn,
landlord of the Boar's Head Inn, Friargate, who, with his wife and an
infant, and two other children, were asleep in a double-bedded room
in the attic storey of the house, was startled by a loud and unaccountable
crash. This apparent explosion was caused by the falling, a few yards
from his bed, of a stack of chimneys on the roof over an adjoining bedroom.

A king-post to the ridge-beam would appear to have thrown much of
the falling debris into the adjacent bedroom.
Preston Chronicle  28th February 1835
*
THE O'CONNELL TRIBUTE
A meeting of the Friends and Admirers of D. O'Donnell Esq., M.P.
was held at Mr. Blackburn's, Boar's Head Inn, Friargate,
on  8th July 1835.
The "O'Connell Tribute Association"
P.WHITTLE
Chairman of the Association.
Preston Chronicle  18th July 1835
*
Mr. J. HARDY
Teacher of Dancing, from Edinburgh.
Respectfully intimates to the Inhabitants of Preston,
that he will open a Class, at the Boar's Head Inn, on
Tuesday the 9th instant, to give instruction in this
useful and elegant accomplishment.

Days of attendance, Tuesday, Thursday and Friday
from 9 to 11 o'clock in the forenoon.
Preston Chronicle  6th August 1836
* 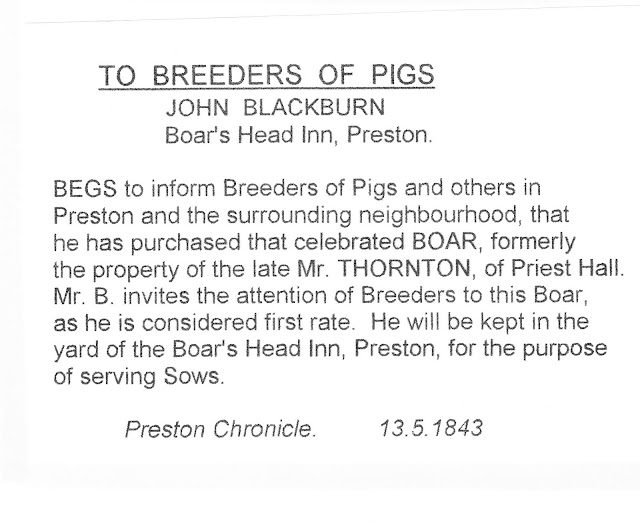 Preston Chronicle  17th August 1844
*
*
TO CLOSE A TRUST
Sale by Auction on 20th October 1881:-
ALL that old-established and well-accustomed PUBLIC HOUSE,
called the BOAR'S HEAD, in Friargate, Preston, with the
Brewhouse, Stables, Granaries, Washhouse, Outbuildings, and
Land. The Boar's Head is situated in one of the very best
thoroughfares in Preston, and has long been well-known as a
favourite house. Early possession may be had. Stock &c., to be
taken at a valuation.
Further particulars may be had and a plan inspected on
application to Mr. THOMAS SMITH, the Durham Ox, Berry Lane,
Longridge; or Mr. HARRY BANNISTER, 9 Old Shambles, Preston. 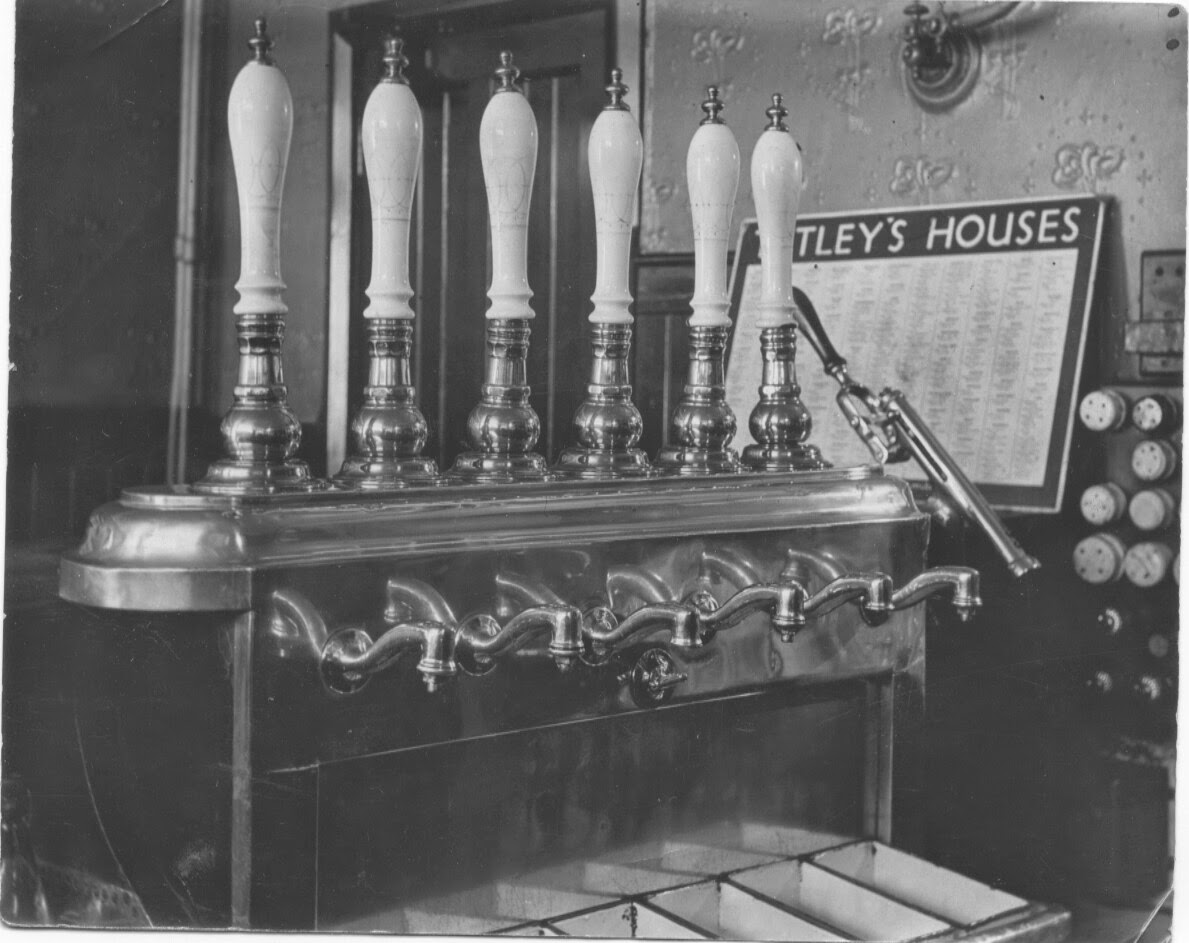 The pumps at the Boar's Head Hotel. 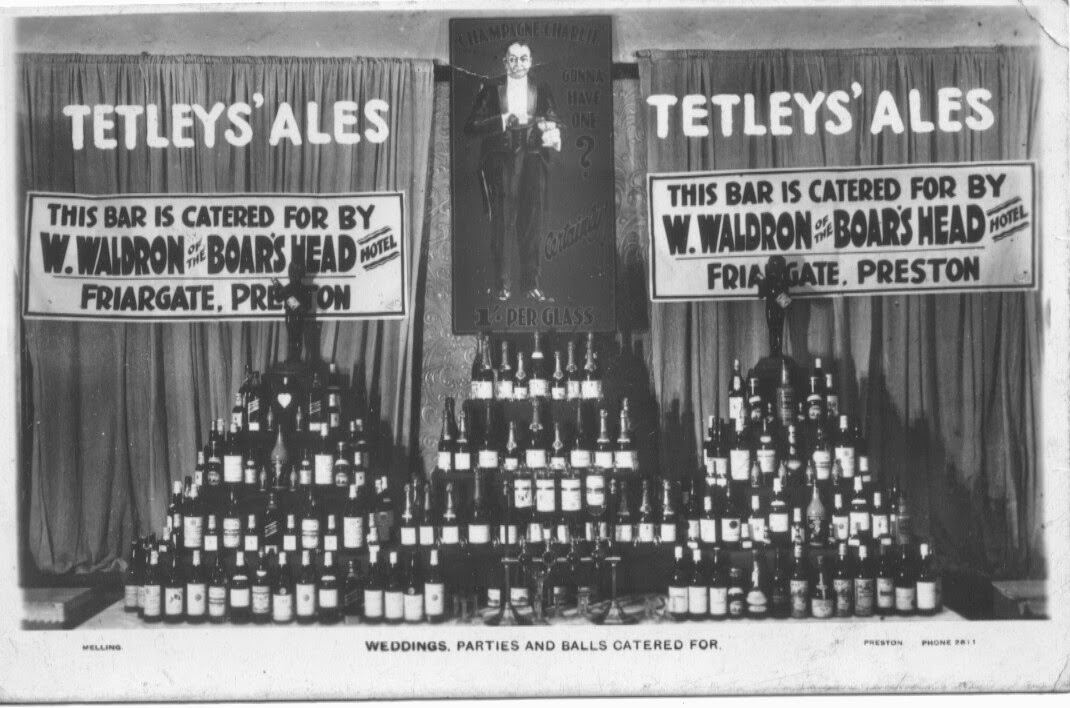 A display at the Public Hall, advertising the outside
catering services offered by William (Billy) Waldron.
* 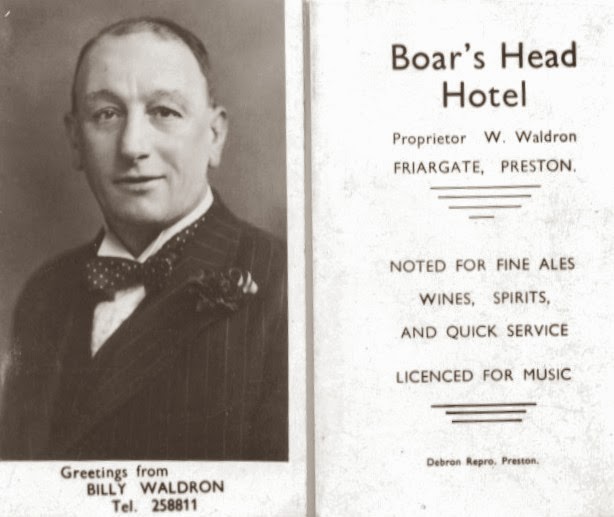 Thought to be synonymous with "The Board" and the "Ram's Head"

*
The 1818 Dirrectory gave no name for Mary Worden's premises - it
was shown as a dash.

The name for the later records gave the name 'The Board'.

There's nothing certain but I think the two are synonymous with one another.
*

The whole of the BREWING UTENSILS,
used by him, consisting of a copper boiler.
Preston Chronicle 22nd March 1828
*
Posted by Steve H at 15:51 No comments: