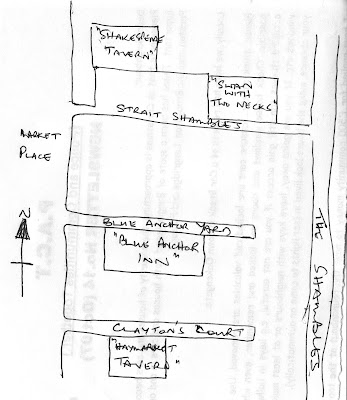 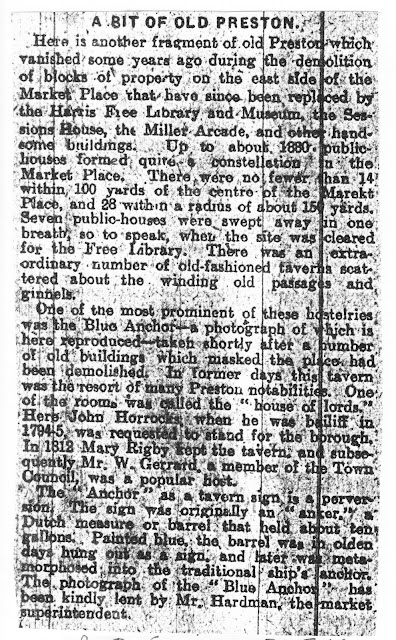 *
The following is a letter address to the landlord of the Blue Anchor in 1790.
(Taken from a collection at L.R.O. - unfortunately I haven't a reference number for it)

Burwell
September 9th 1790
Dear Brother and Sister,            This comes with our kind love to you
hoping to find you in good health as we all are Bless God for it, and to
let you no (sic) that your aunt Sarah and aunt Ruth is both dead and
I have got 8 children, but my eldest son is Listed in the Cambrig light horse
and to beg the favour of you to let me no if you have any wall nuts in
your country, now if you have not I will send some and if you think they
will sell well I can come with about 2 hundred thousand for I have horses
and carts of my own unless you think they can come cheaper by the
waggon, but I hope you send me word by return of the cost for we have
got great plenty of wall nuts this year as ever was known.

Pray send an answer by return of post upon the account of buying them.
My daughter bet (sic) lives at service at Cambridge.

From you ever loving brother and sister Stephen and Sarah Pallmer.

*
*
BLUE ANCHOR INN
Case at |Lancaster Assizes re:
Counterfeit Coins at the Inn.
-
...................Martha Melling is 12 years of age, and lives
with Mrs. Threlfall of the Blue Anchor. She serves in the bar
occasionally, and knows the prisoner. At about 7 o'clock on the
night of the 5th May, the prisoner came to the house and asked
for a glass of ale, which she took to him, and he gave her a shilling.
She returned the change, and on Mary Brown, the barmaid, coming
in, she discovered the shilling to be a bad one.
-
The prisoner was transported for 12 years.

Preston Chronicle   30th July 1842
*
THEFT
On Saturday last, a young man who, on account of his theatrical
propensities, has been distinguished by the title of the "Preston Roscius"
besides enjoying other sobriquets, which it is unnecessary to enumerate,
was charged, at the Town Hall, with appropriating certain monies - 8s. we believe -
the property of Mr. Threlfall, sign of the Blue Anchor, Market Place.

It appeared from the evidence, that the prisoner, on the night of Monday week,
being in the bar of the Blue Anchor, had taken advantage of the momentary
absence of Mrs. Threlfall and her daughter, to dip his paw into a glass or tumbler,
in which there was some silver, and to abstract therefrom the sum above named.

Mrs. Threlfall, however, happening to be coming towards the bar at the moment,
heard the jingling of the glass and silver, and immediately taxed "Roscius" with
the peccadillo. He owned the "soft impeachment," returned the money, and was
allowed to depart.

Having subsequently, however, threatened an action for defamation, the result
was his being brought before the Mayor, on the charge mentioned. He was
committed to stand trial at the Sessions.
Preston Chronicle   10th February 1844
*
PROPOSED RE-ESTABLISHMENTOF PRESTON RACES
On Thursday last, a meeting of gentlemen anxious to re-establish Preston Races, was held a the Blue Anchor Inn, pursuant to a circular issued by the Licensed Victualler's Association. There was a numerous attendance, and resolutions in accordance with the object of the meeting, were agreed to unanimously. Upwards of £50 was subscribed by those present, and it was resolved to make a general canvas of the town, for further subscriptions, next week; after which the meeting adjourned until Tuesday next, at the Bull Inn.
It is intended to hold the races on the Holme, on the Wednesday and Thursday, the 1st and 2nd October.
Preston Chronicle   30th August 1845
*

Preston Chronicle  2nd May 1846
*
MELANCHOLY OCCURRENCE IN GRIMSARGH:
An inquest on the body of Mary Bateman, daughter of
Mr. George Bateman, of the Blue Anchor Inn, Preston,
and whose death by falling into a pit of water in Grimsargh
was recorded in our last, was held on Saturday, when a
verdict of "Accidentally drowned" was returned.
Preston Chronicle  12th July 1851
* 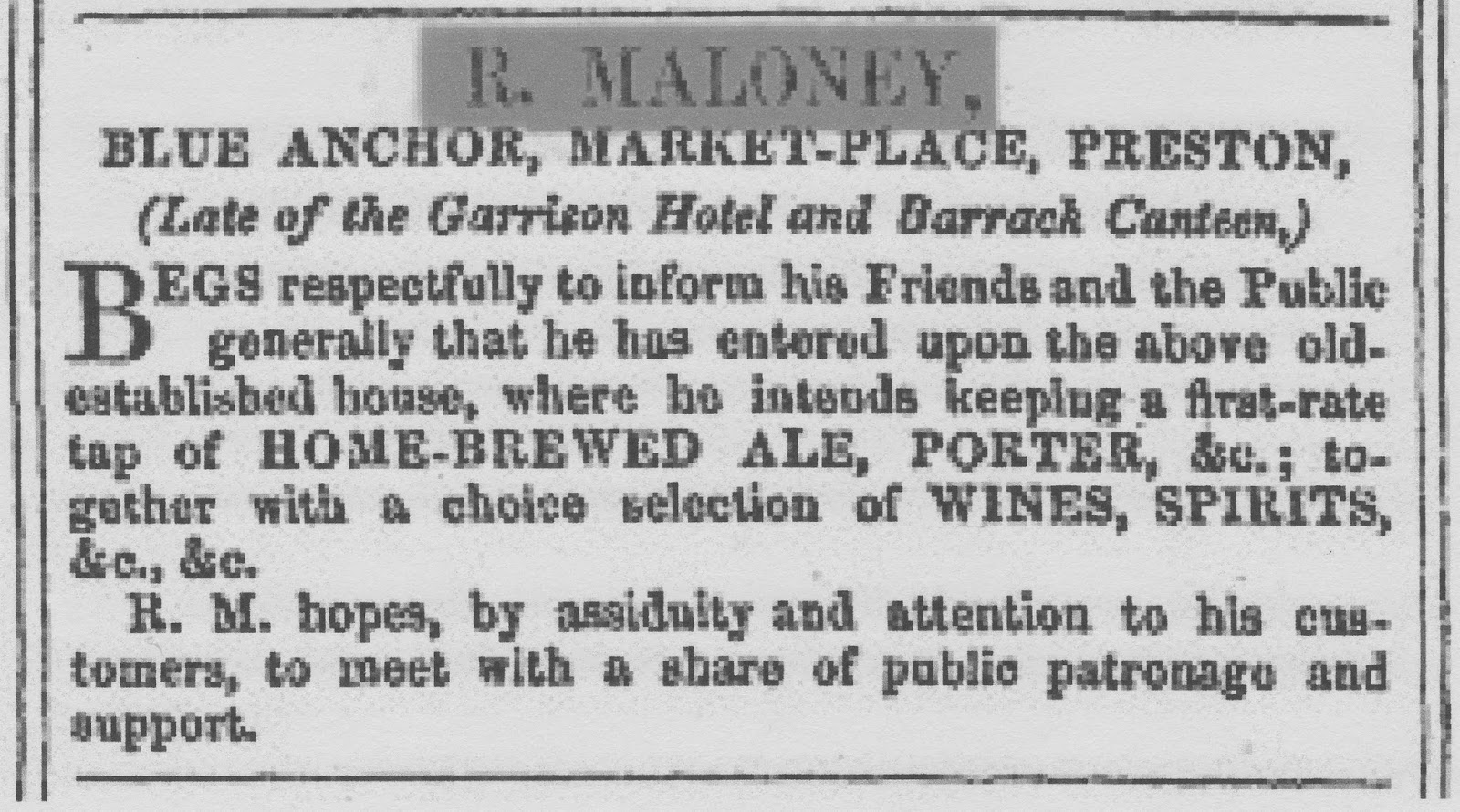 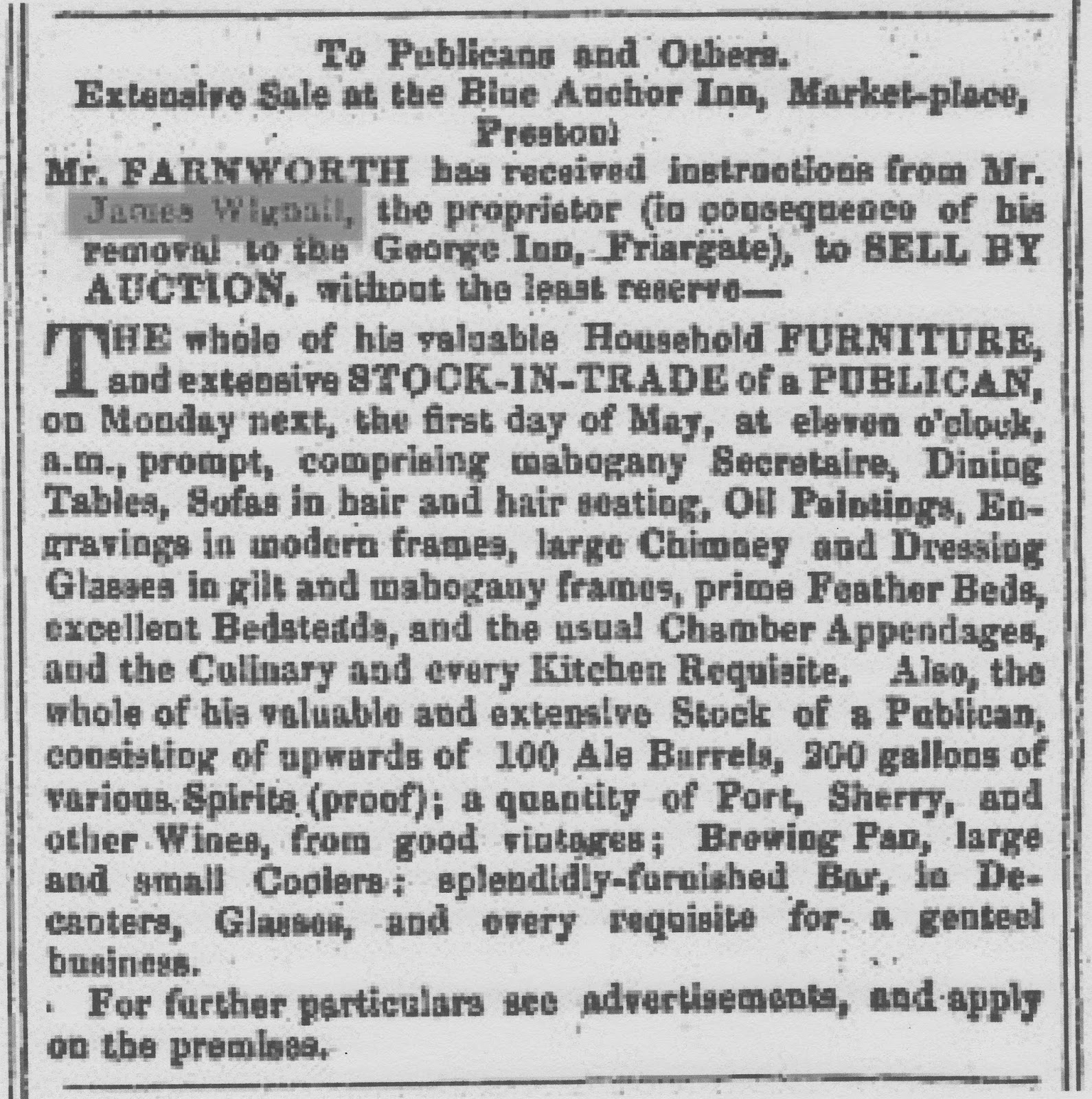 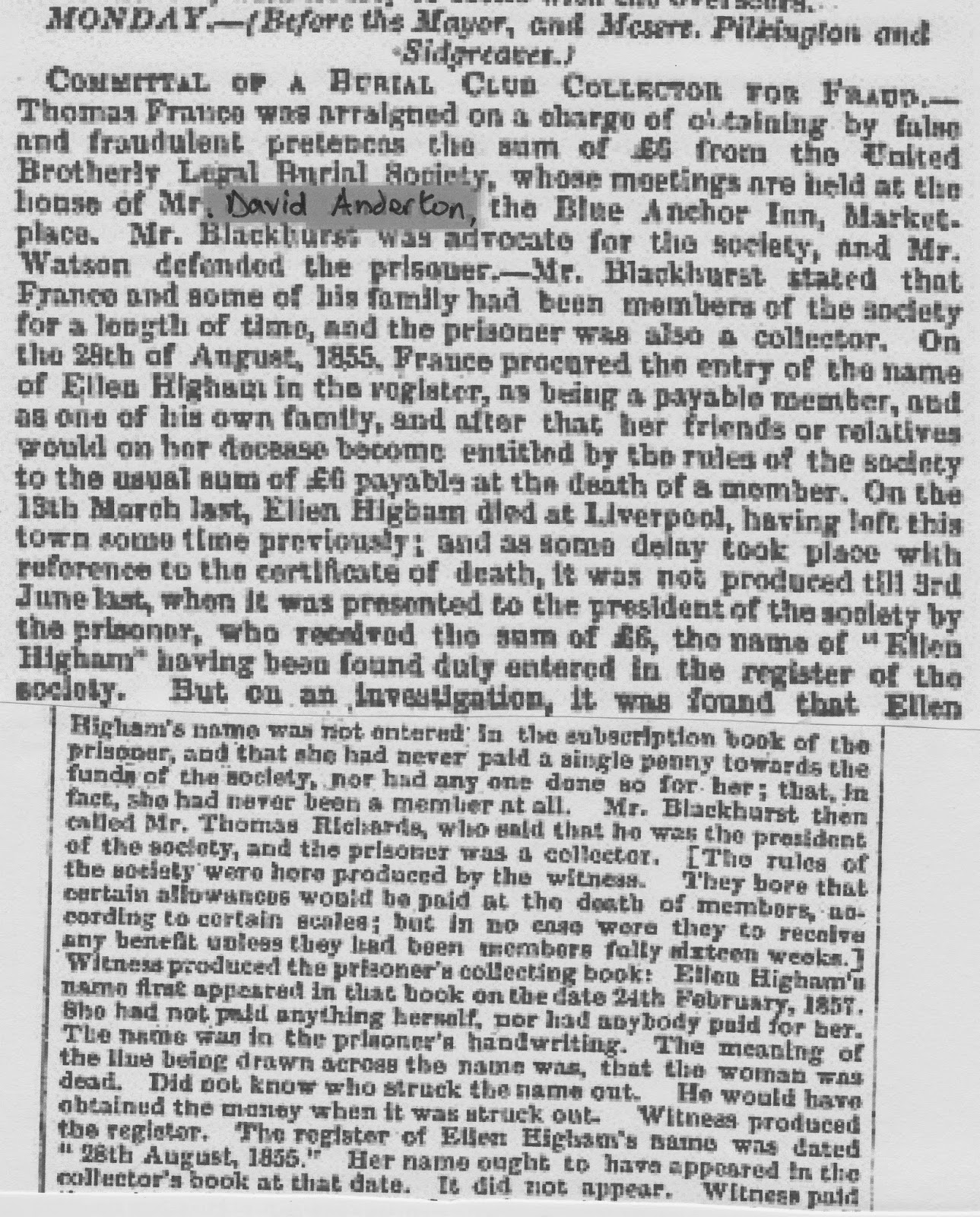 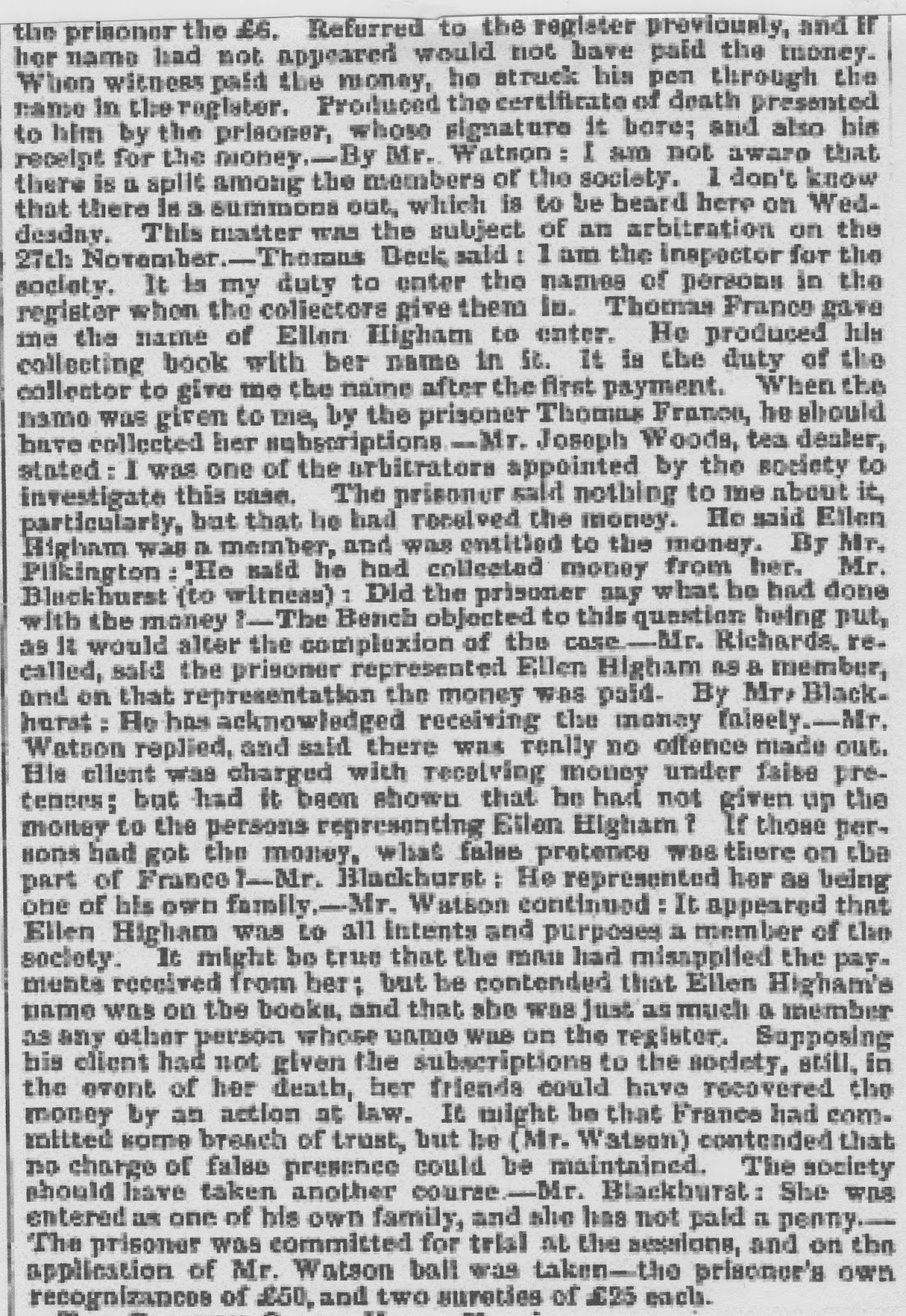 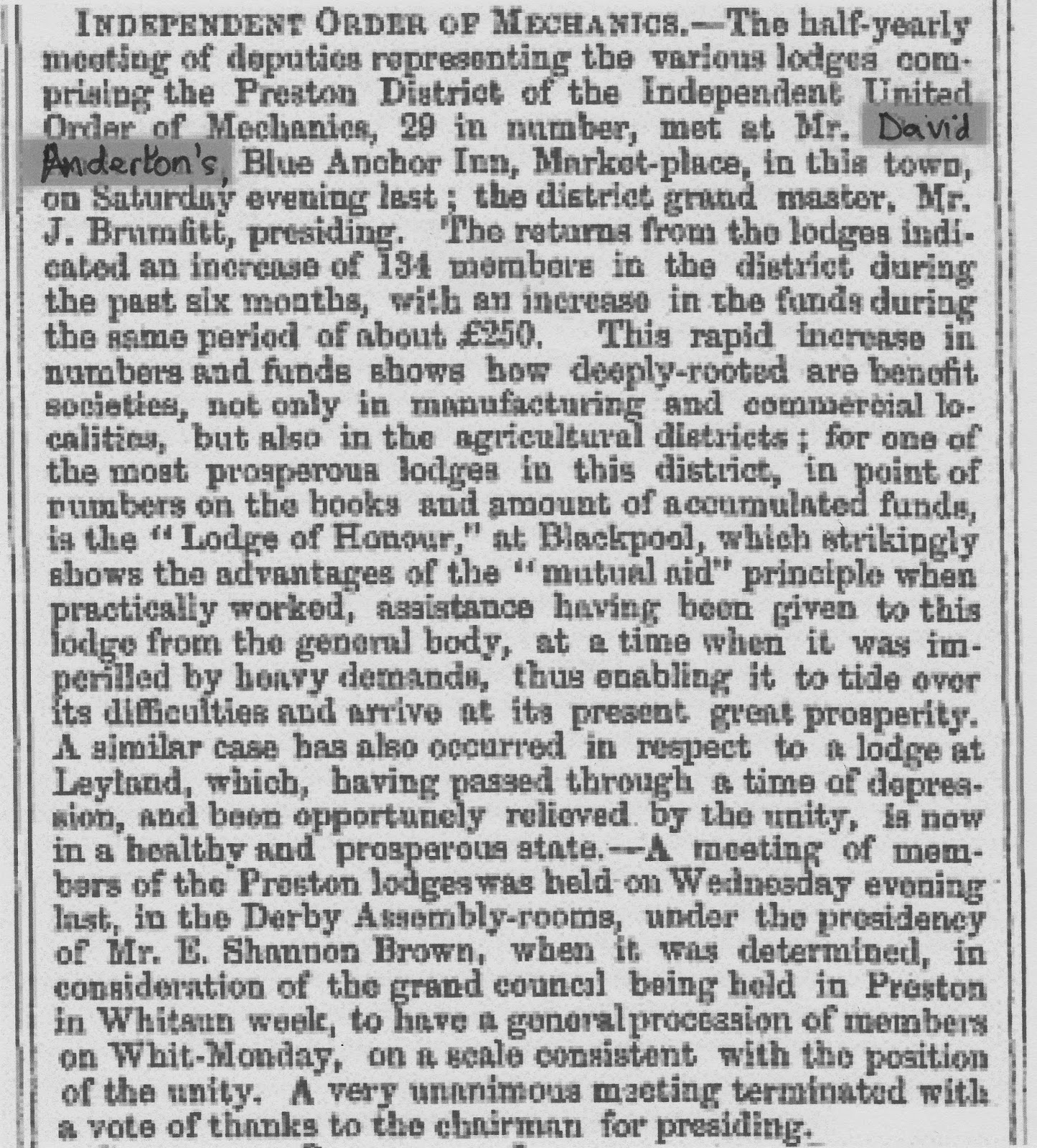 Preston Chronicle  21st May 1859
*
Independent United Order of Mechanics
The annual grand council of the above Order held its deliberations in the Britannia Lodge Room, Blue Anchor Inn, Preston, on Tuesday, Wednesday, Thursday and Friday, the 14th, 15th, 16th and 17th inst. All the deputies were present, the Grand Master presiding, and the Liverpool deputy occupying the vice-chair.
The reports from the various districts were of a very gratifying character, both as regards the increase of members and funds; of the former the addition had been to the extent of nearly 13%, and the latter to the amount of more than 5% upon the sick fund alone - the average of the said fund being about £4 per man.
The tribute fund has also largely increased during the same period, in consequence of the district being in such a position as not to require assistance, notwithstanding the number of those who are receiving permanent relief, several of whom have done so for a period of from 7 to 9 years, which is a benefit unprecedented in any other friendly society.
Carlisle Journal   24th June 1859
* 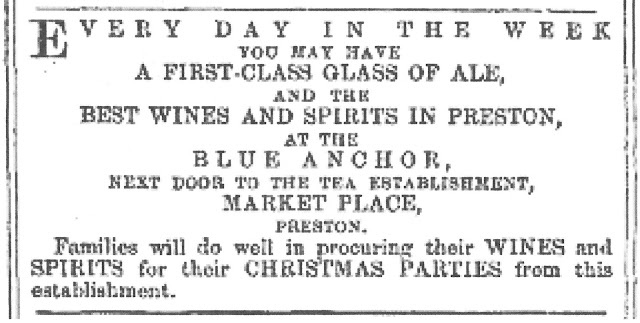 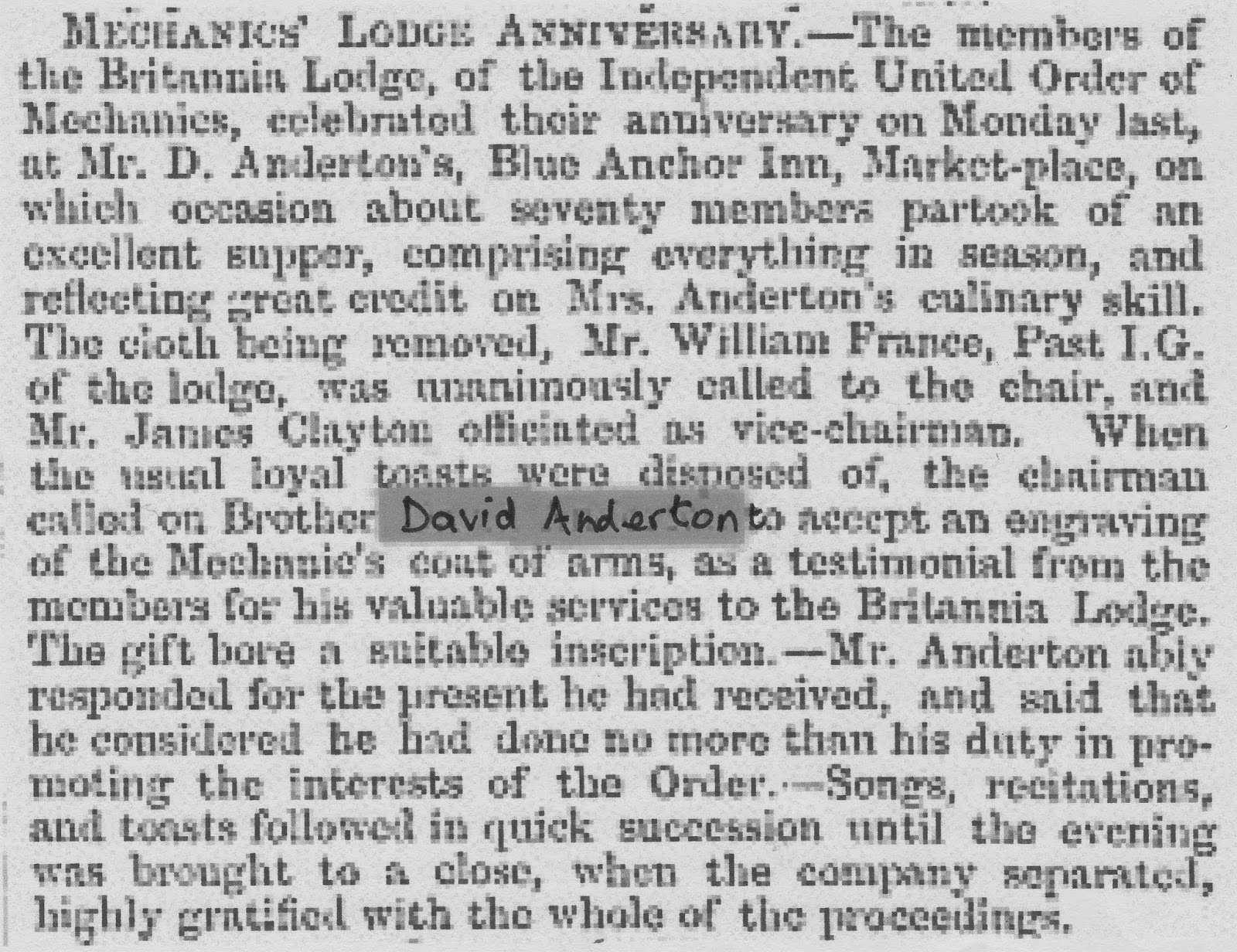 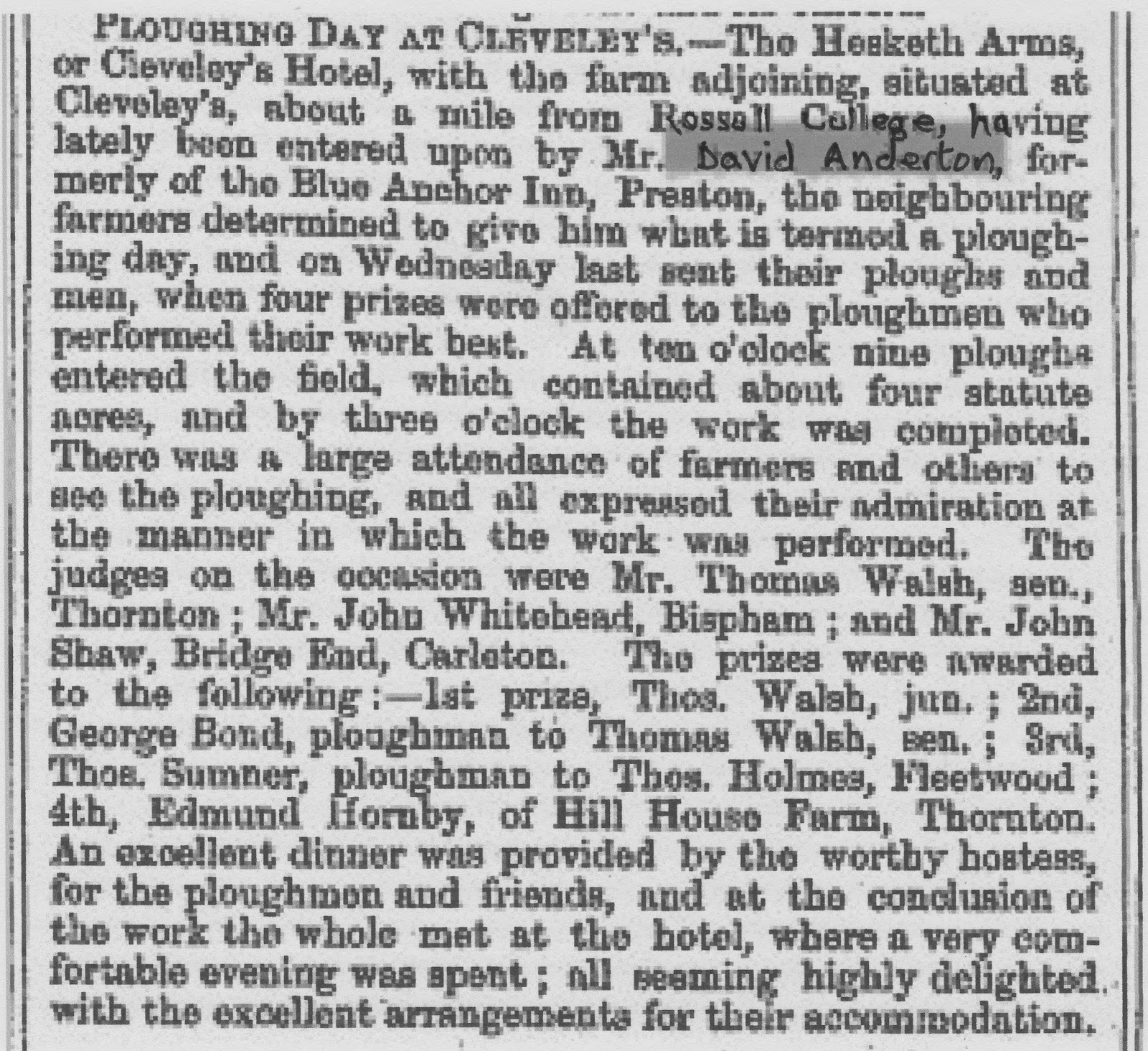 Mrs. Watson had gone into the inn looking for her
husband, but had been met by Mrs. Lofhouse, who
pushed her out, saying, "Get away you little ............."
Mrs. Lofthouse denied it, saying that she said, "Go
away you nasty impudent thing, and don't annoy me
anymore." (laughter in court). She denied using any
violence.

The Mayor said that under the circumstances of the case,
justice would be served by Mrs. Lofthouse paying 2s 6d
costs, which she did. 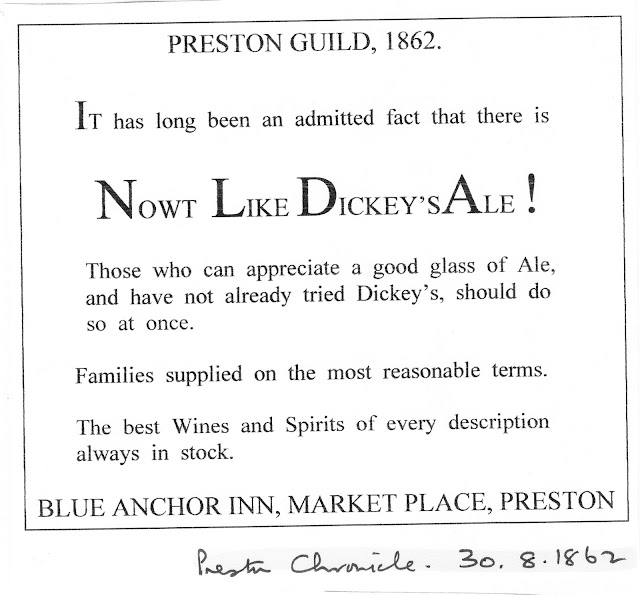 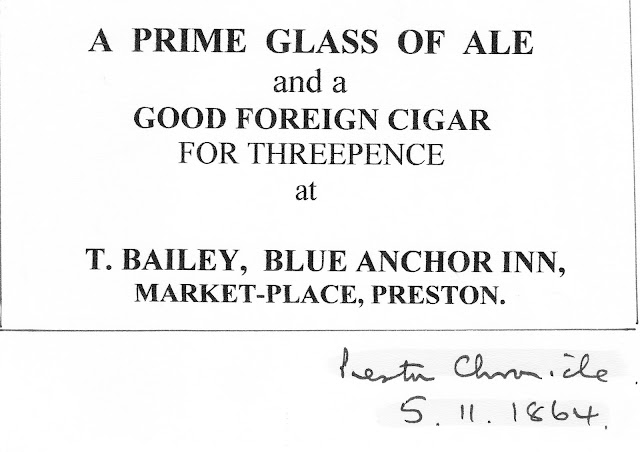 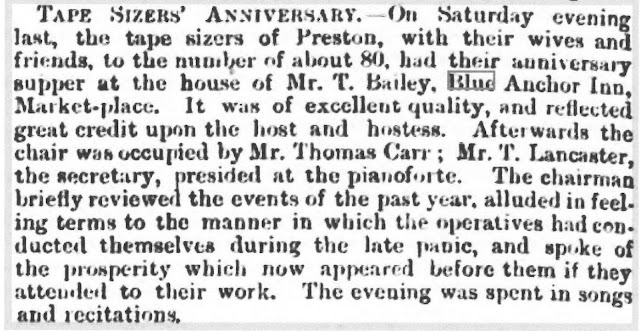 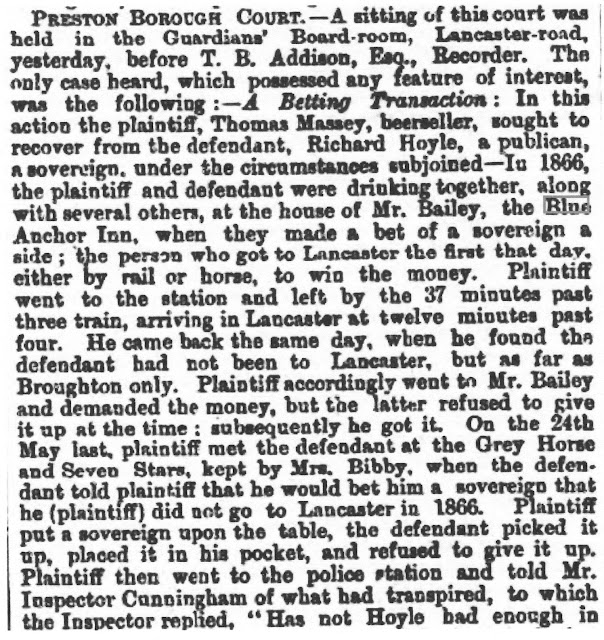 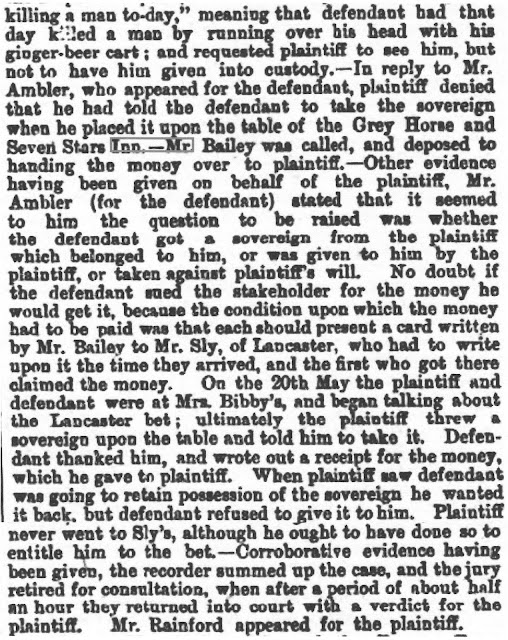 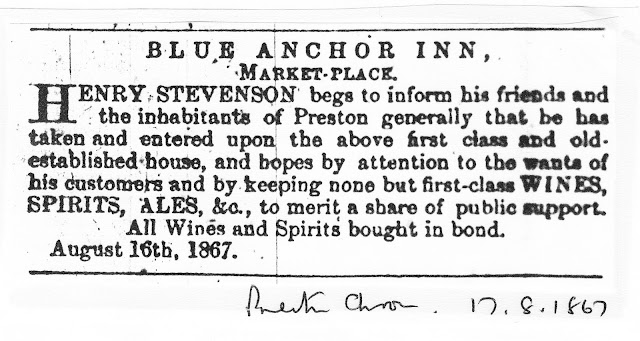 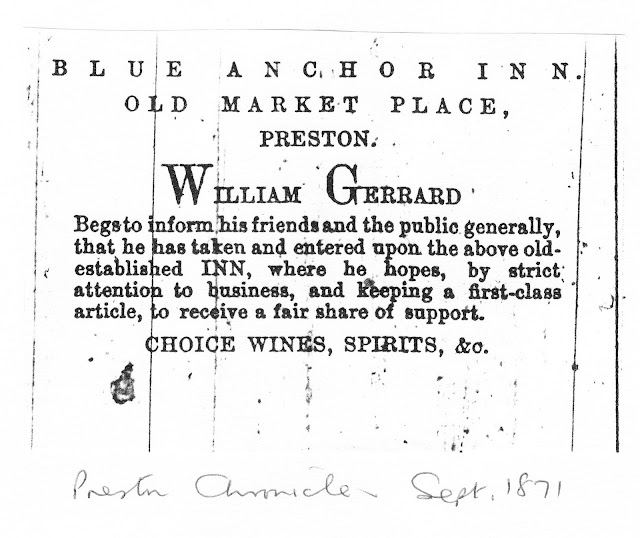 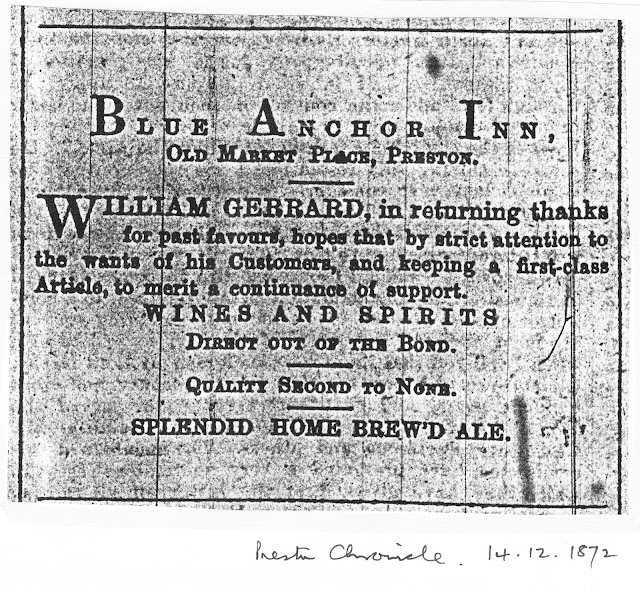 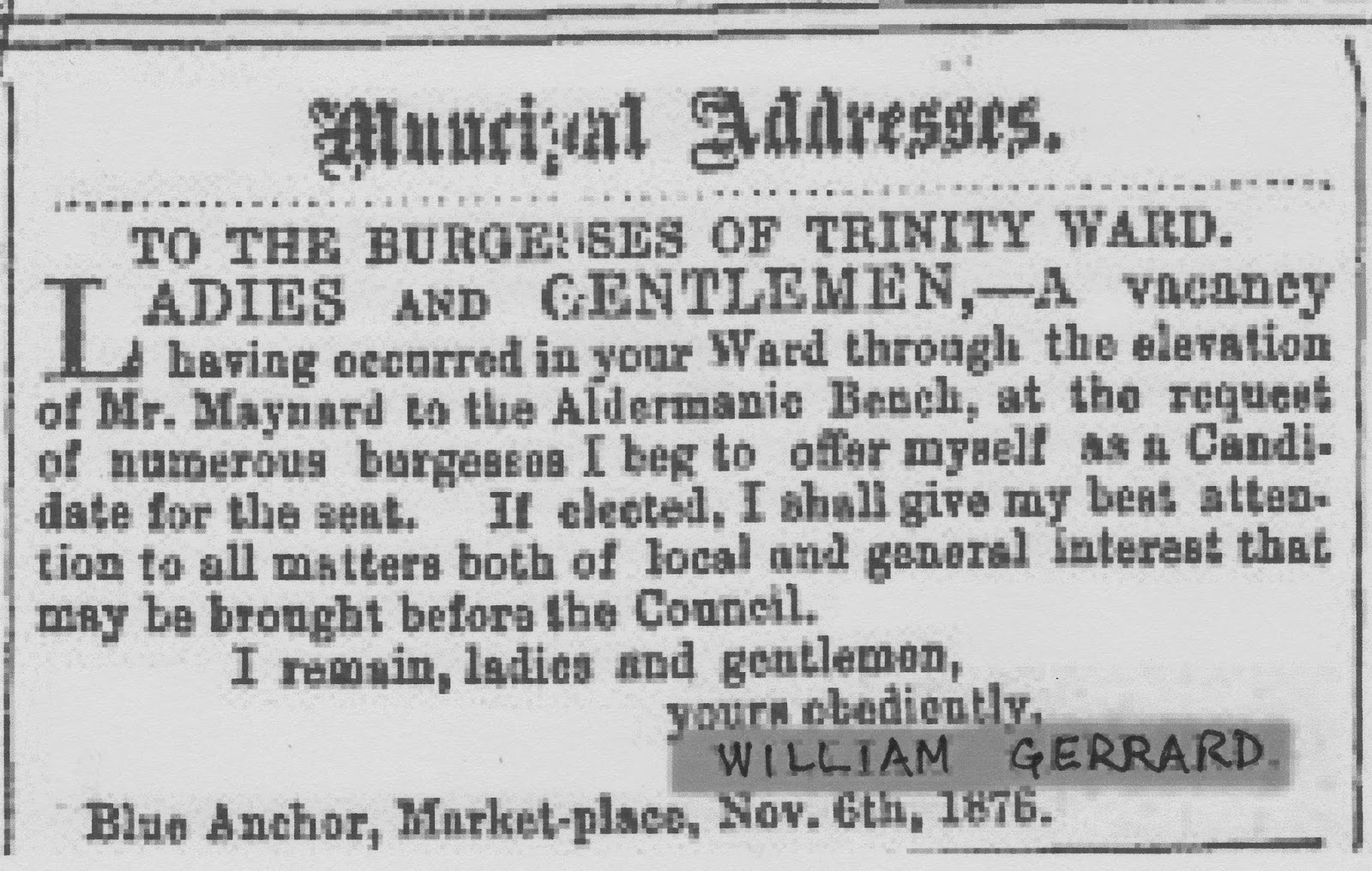 LADIES and GENTS:  My term of office as your representative
in the Council being about to expire, I beg most respectfully to
again offer you my services; and should you again honour me with
your support, I shall continue, to the best of my ability, as I have
hitherto done, to attend to your interests.
I remain, Ladies and Gents,
Your obedient servant
WILLIAM GERRARD
Blue Anchor Inn, Preston Oct. 17th 1878
Preston Chronicle  19th October 1878
* 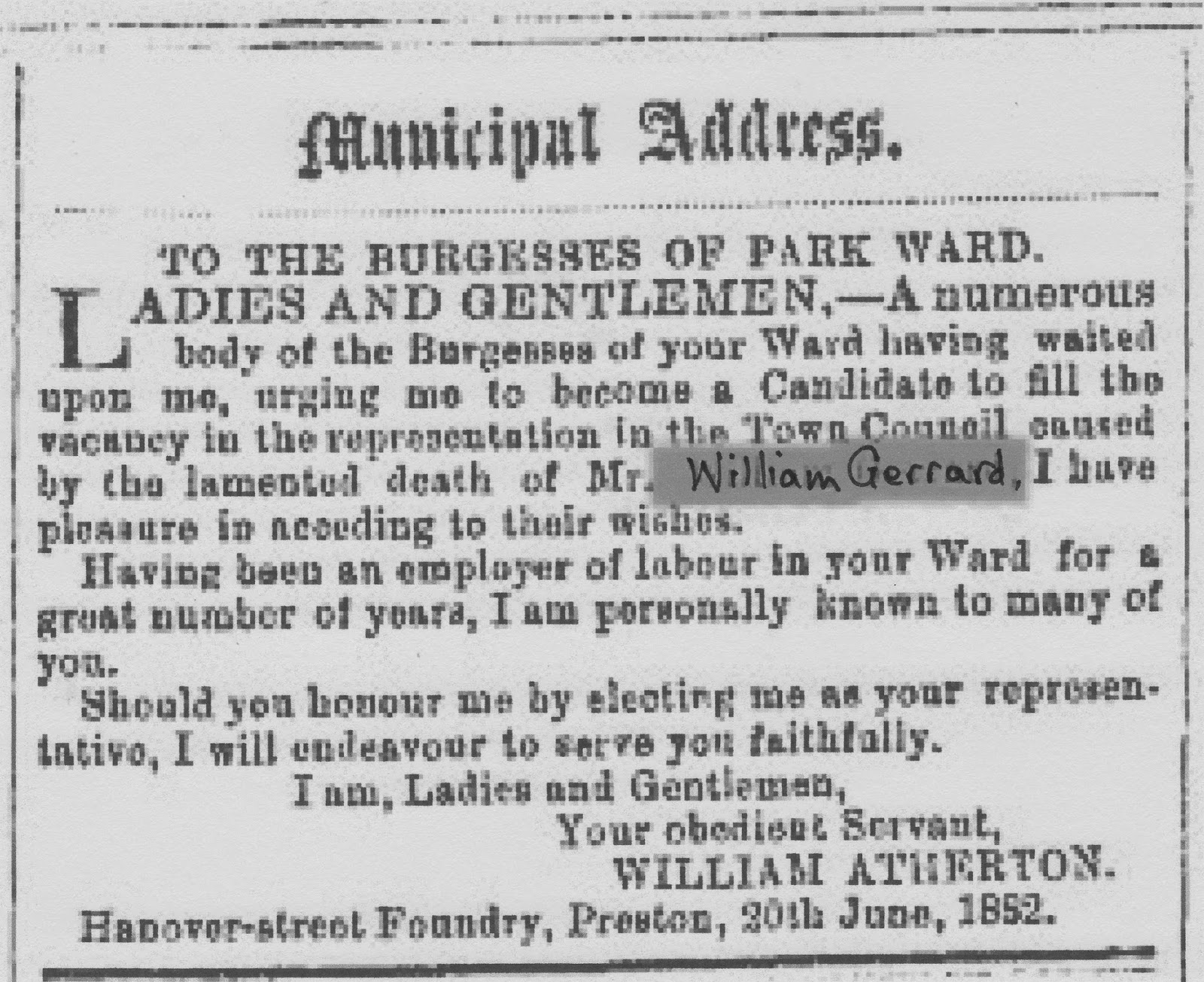 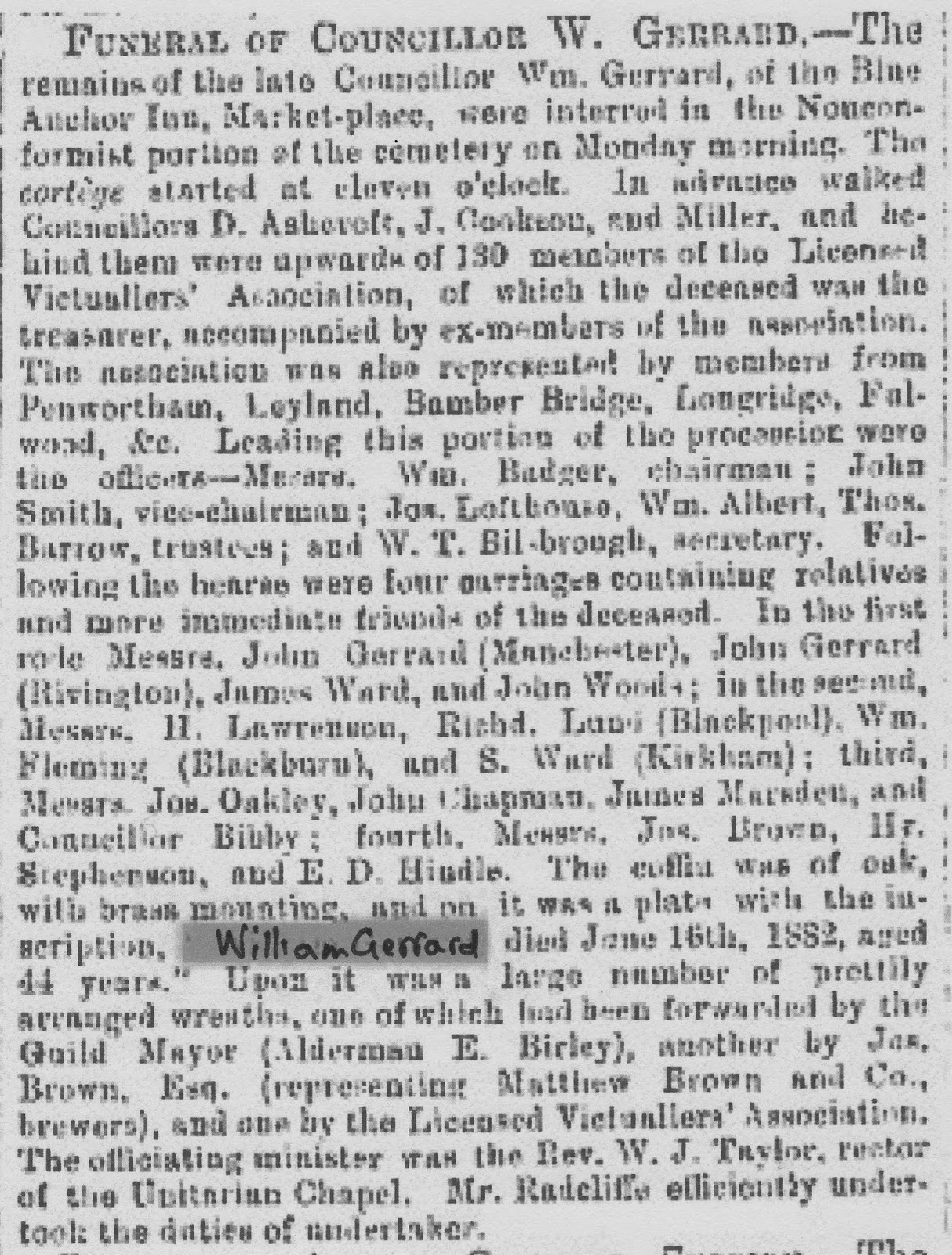 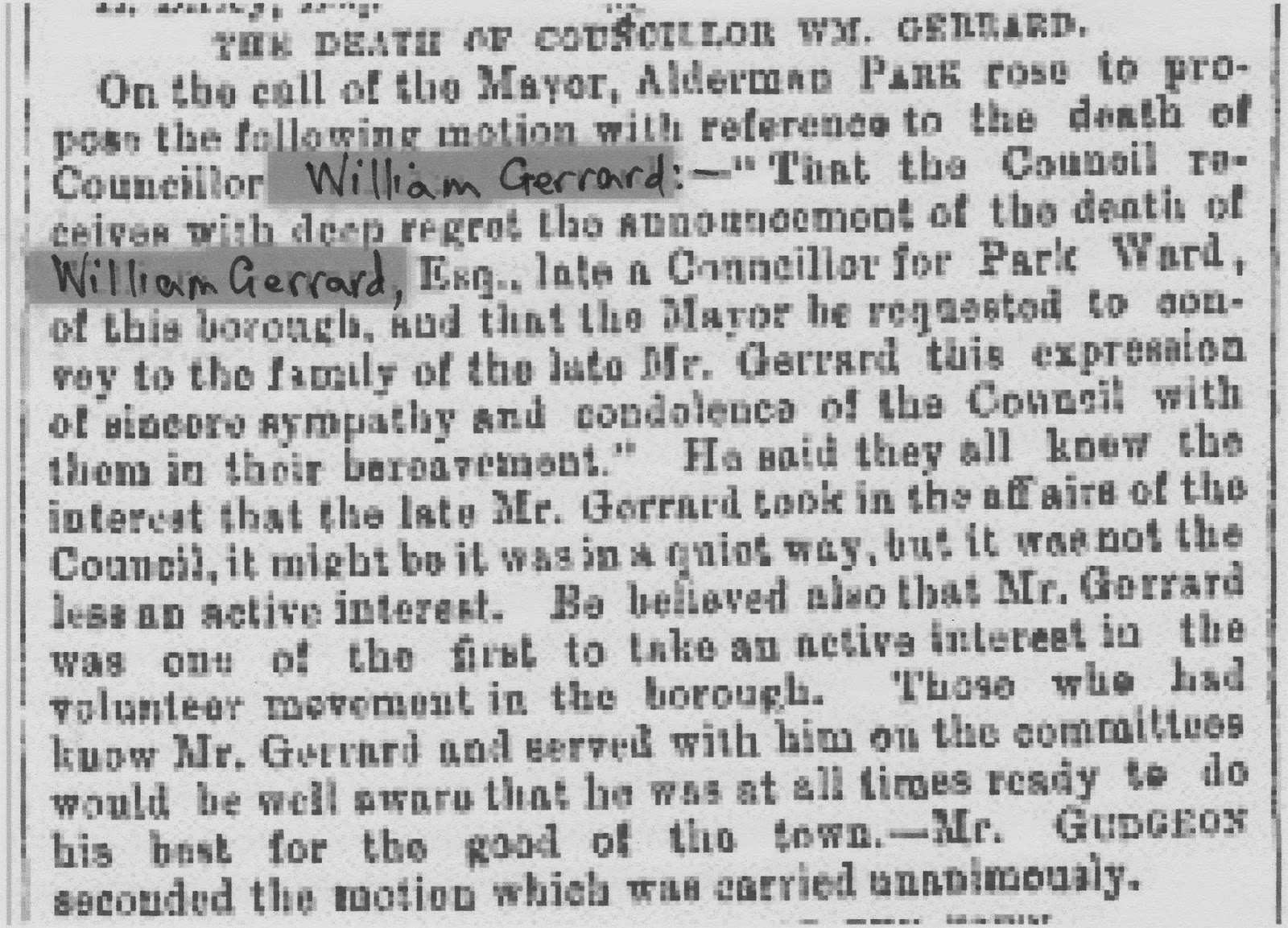 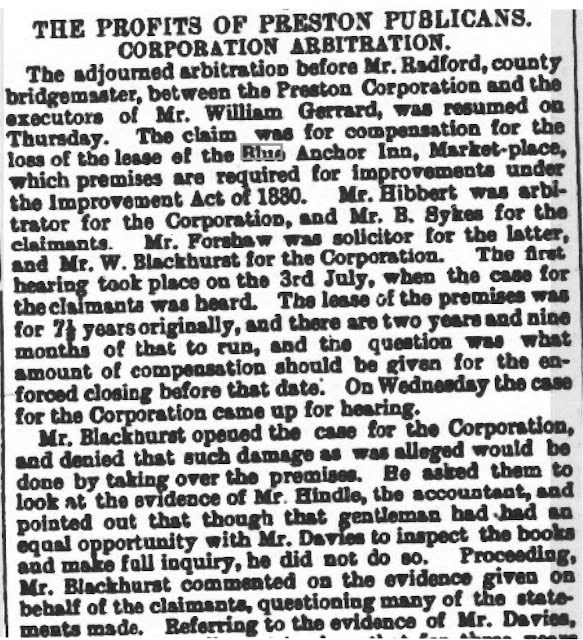 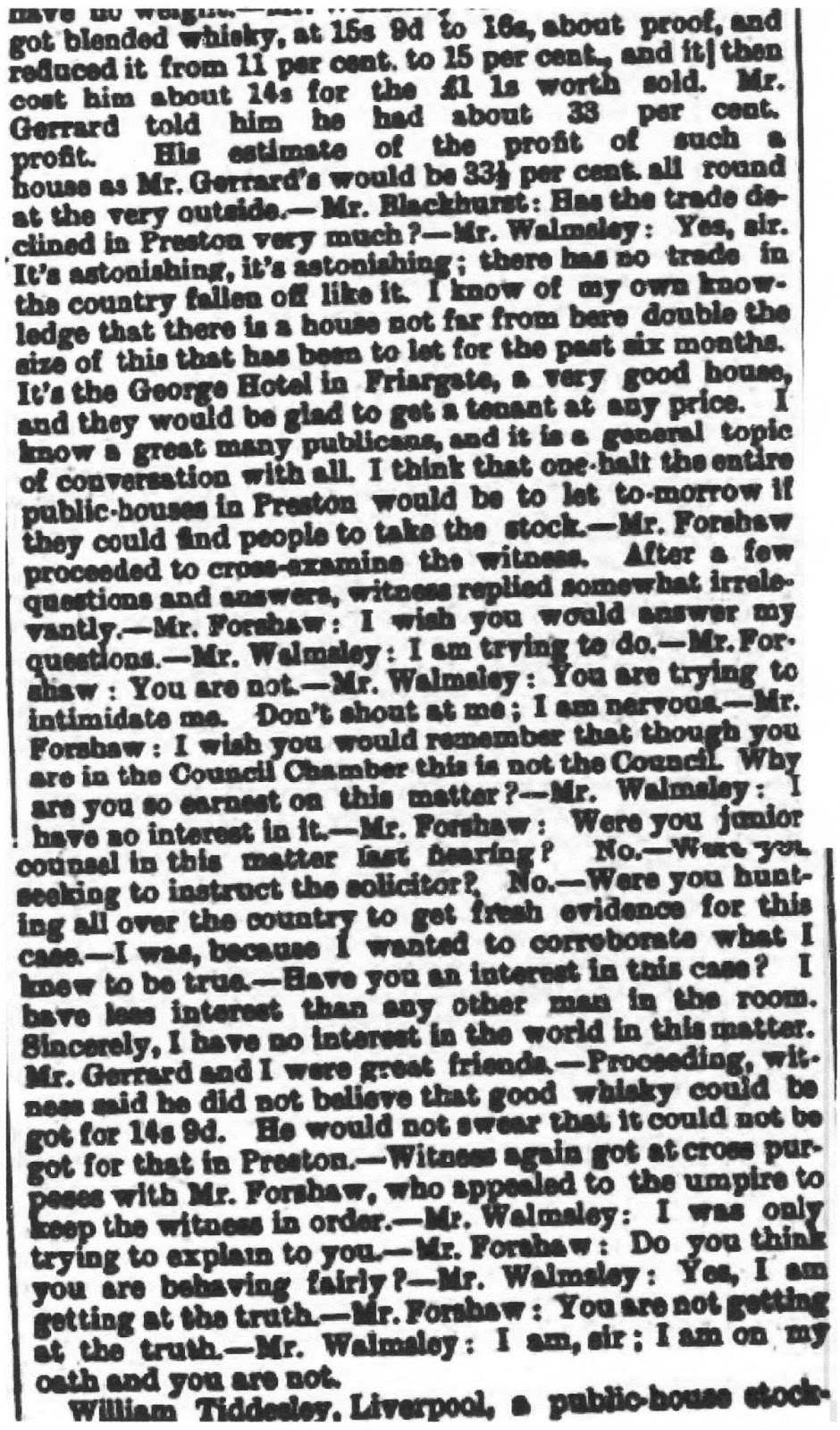